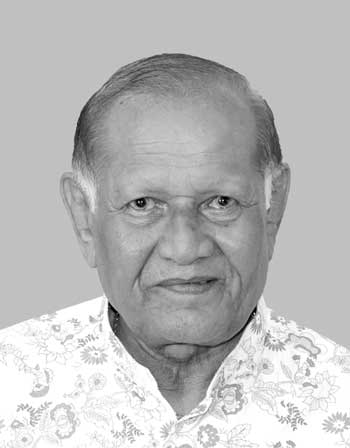 The knowledge of the island’s traditional Ayurveda practice is one that has been carefully guarded and secreted within practitioner-families. Its practices and rituals have been passed from one generation to the next – often from father to son – by personal tutelage, thereby preserving confidentiality.

Practitioners consider it an honour and a privilege to bear the appellation vedamahattaya, conscious of the heritage of the tradition. Deshabandu Dr. Victor Hettigoda understood the great compliment his father kidney specialist and astrologer Dr. Hendrick de Silva Hettigoda paid him when in 1969… Of his nine children, he chose him – his fifth.

Hettigoda’s ancestors had been Ayurveda physicians for over 200 years, and his father founded the Hettigoda Group in 1934 to corral the services and benefits of his practice. The father saw in his son the entrepreneurial spirit that would springboard centuries of knowledge and expertise into the modern age.

Under his father’s guiding hand and watchful eye, Hettigoda apprenticed, learning the theory and practice of the ancient indigenous system of medicine, consulting crumbling manuscripts, and breathing in the odours of potions, poultices and unguents.

His diligence and dedication were so remarkable that his father was convinced that it was time to share a closely guarded family secret – i.e. the formula for a balm with powerful healing and analgesic properties, known as Siddhalepa.

And so he launched a venture in 1971 and the flagship brand of the Hettigoda Group came to the open market. It was no mean feat to manufacture in the commercial quantities required, source funding and persuade other practitioners to not only try the product but recommend it to customers.

Simply Google ‘Siddhalepa’ and websites will declare that the herbal balm will relieve countless ailments from migraines to toothaches, to joint and rheumatic pains.

Hettigoda is known today as the ‘Father of Ayurveda’ for the way in which he has made Ayurvedic alternatives not only accessible but desirable against more familiar options with longevity in a household’s medicine cabinet. His vision has literally brought a vedamahattaya to every home.

He has made his mark rather differently from his antecedents who practised indigenous medicine, studying texts but committing nothing to paper. In 2003, he authored Welandamen Diyunuweemata Maga (The Way to Prosper through Trade), which would prove instructive to anyone seeking to walk his path and is a rather different addition to such a closelipped tradition.