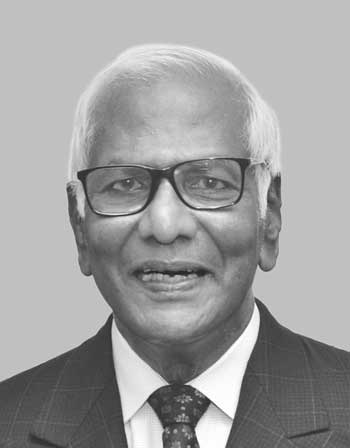 No other name is as synonymous with corporate leadership in Sri Lanka as that of Deshamanya Kandiah (Ken) Balendra.

There is something in the quality of this gentleman that has drawn people and power to him in equal measure. There is empathy and an endearing quality that’s irresistible. He is a genial goliath of the nation’s commercial milieu who has often described himself as a ‘team player.’

He has redefined the term. Here is a revealing example.

Balendra understood that self-confidence is a very necessary trait for effective leadership – one which is frequently insufficiently nurtured. Too often, he had encountered reticence in expressing opinions or taking the initiative. So he transcribed his experience on the rugby field to the management skills for a corporate to address this.

Many among today’s corporate leadership owe their positions and successes to Balendra’s brand of team playing.

He mentored and nurtured what he called a ‘2020 Team’ – men and women whom he considered outstanding young executives with the potential to be leaders of John Keells Holdings (JKH) in 2020. He then imbued them with his unique brand of participatory leadership.

Team playing meant informal meetings at which everyone spoke up, shared ideas, and critiqued and created together – working on corporate values and vision, growing capacities and capabilities in expression, ensuring that everyone was heard and empathy encouraged.

Balendra captured our imagination as JKH’s first Sri Lankan chairman. The dynamism with which he led the organisation and transformed JKH into a highly diversified blue chip conglomerate, and the only Sri Lankan Company to be listed among the world’s best 200 small companies by Forbes Global, he would readily ascribe to this brand of team playing.

He is also one of a handful of businesspeople to be awarded the Sri Lankan Of Year accolade by LMD.

Undoubtedly, he was one of the most successful chairmen in the local corporate landscape so much so that the devices and disciplines he introduced to JKH propel the conglomerate to this day.

JKH is what it has become because Balendra persuaded so many executives to take on the responsibility for more than they thought they could and gave them the courage to handle the ensuing challenges. He only demanded accountability and ethical behaviour in return.

He knew that with this formula driving the team, success would come as a matter of course; for Balendra understood the value of great followership, and that team playing meant a place and space for a measure of each quality in every individual.