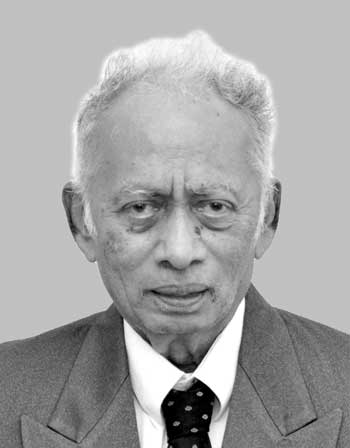 Rajan Asirwatham recounts in his own words in a letter: “I remembered the old maxim I had been taught, that when in the presence of seniors ‘speak only when you’re spoken to’.”

Doubtless that as Asirwatham himself grew to be an esteemed ‘senior,’ he could leave some of this reticence behind in the years to come as he took his seat at the table as a highly regarded and sought after accountancy professional.

Asirwatham was the Senior Partner and Country Head of KPMG Sri Lanka (KPMG) – formerly Ford Rhodes Thornton & Co – for well over four decades from 1961 to 2008.

Under his stewardship, the audit firm diversified into numerous other services apart from accounting and auditing; and despite its relatively small size, KPMG Sri Lanka has always had a seat at the table on the international firm’s Middle East and South Asia boards.

In his distinguished career as an accountant, Asirwatham set several benchmarks in audit and advisory services, held numerous important positions in public sector and professional organisations, and continues to serve on the boards of corporates and engage in various social activities.

Upon his retirement in March 2008, he planned a quiet time for himself, “doing some charity and church work, and reading Charles Dickens, Walter Scott and Jane Austen.” But a good man cannot be allowed to rest on his laurels when he has so much more to do on his God’s good Earth.

Asirwatham has remained much sought after: an invitation to serve as a trustee of a charitable foundation, directorships on the boards of prestigious corporates, a member of the board of governors of prestigious schools, he is as much in demand as he ever was.

But despite these accomplishments, he is a quiet unassuming man who speaks his truths not only when he’s spoken to but with a care and consideration that has engendered this great demand for his expertise and time. Time perhaps, which he still has too little of, for himself…

Is it time yet for Dickens and Scott and Austen?

Not yet – as too many still wish to speak to him and hear the words he has to say… Not yet – he is still too busy adding to his accomplishments and appointments, which could fill a volume with ease – to truly have time to retire.