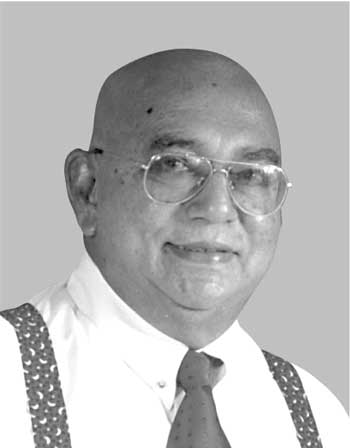 The world of advertising attracts the most multifaceted and variedly talented men and women – and so it was the ideal milieu for work and expression for Deshabandu Reginald (Reggie) Candappa, whose many interests and capacities included distinction as a journalist, author, adman, photographer, cartoonist, political satirist and artist – all of which originated from his perennial love of learning.

Candappa began his learning curve that led him into advertising at Lake House as a political cartoonist and journalist. His talent and hard work was soon recognised, and Candappa was moved to head the advertising department, and given the rare opportunity to visit the US on a scholarship.

On this visit, he met an American adman Will C. Grant in Chicago, which was how the first Grant office came to be set up in Sri Lanka in 1958. The agency he started at his dining table with wife Theresa and their first client – Trans World Airlines (TWA) – thrives today, shaping and redefining advertising in Sri Lanka.

As is typical of generous and secure men, Candappa sought and recruited men and women who were as creative and clever as himself – or even more so – into his agency. He knew the value of having the best possible talent and never shied away from elevating those who particularly shone.

In wonderful displays of his ‘godfatherliness,’ he would consider what was best for his employees’ personal development, and encouraged them to take on bigger and better roles even if they weren’t with him. He took pleasure in seeing men and women who were on his team doing well in rival agencies or moving to work with their former clients.

He was munificent in other ways too – with his wealth, with his time, with a listening ear. One aspect of his generosity was his lavish contribution to the artistic community and being a painter himself helped budding artists with exhibiting their work.

But his bigheartedness had extended far beyond bounds even his close family had imagined – for at his funeral, throngs of people whom he had helped in their difficulties, came to pay their respects.

Candappa was determined to live a full life, a successful life – and to him, such a life encompassed compassion, kindness, generosity and a love for humanity. He was a godfather – but not just of advertising.

Reggie Candappa: he granted everyone a place in his munificence.