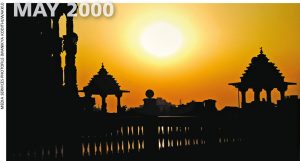 In addition to addressing the future of South Asia and global relations in Europe, President Bill Clinton’s visit to India, Pakistan and Bangladesh aimed to also focus on the nuclear issue.

The United States has been keen that India should sign the Comprehensive Nuclear-Test-Ban Treaty (CTBT) while the latter for its part has had reservations about it. This highlighted the overshadowing rivalry between India and Pakistan, following their nuclear tests in 1998 that have created the prospect of nuclear war in South Asia.

Apart from these political and diplomatic issues, the major question was the choice of India by Clinton for an official visit at this juncture, considering the cold war that has prevailed between the two countries for two decades. The focus was naturally on the specific significance of this visit in relation to Indo-US relations.

The question that arose is whether it marked a new epoch in relations between the two nations and in the global outlook of the United States. So this visit raised a number of sensitive issues that concerned the future of South Asia and global relations in Europe. An official statement prior to the visit from the US Department of State described the situation as follows: “For decades, the enormous potential of India-US relations went largely untapped – the main reason was an all-encompassing cold war. That legacy has left the burden of history on both our nations that is only now lifting.”

It is significant that the president’s visit began on 21 March at a landmark meeting with the Indian Prime Minister, the highlight of which was the signing of what is called ‘a vision statement.’

“The statement outlines the contents of and defines the agenda of our partnership in the 21st century. We are both agreed that our commitment to the principles and practice of democracy constitute the bedrock of our relations, and our cooperative efforts internationally of peace, prosperity and democratic freedom,” it notes.

Among the main features of this vision statement are the establishment of close business and scientific links between the two countries, with a view to enhancing trends and investment cooperation in energy, harmonising talent in information technology and science, as well as the common concern over the threat of terrorism. Hence the determination to cooperate.

On this agreement, the US president commented: “We have neglected this relationship for more than two decades. It is too important to ever fall into disrepair again. I am committed to building a stronger partnership again and a better world.”

The auspicious opening embodied in the vision statement clearly laid out the objectives of the visit and agreed on a programme for their implementation in the future. The essence of the agreement is self-evident as the establishment of a partnership of sorts between the US and India through which the countries have pledged to work together towards their mutual economic benefit with joint activities in all relevant fields.

Understandably, these are efforts to relate Clinton’s stay in India as well as visits to Bangladesh and Pakistan. The first was purely a goodwill visit with Bangladesh being rewarded with a substantial package of aid.

The visit to Pakistan was the crucial event indeed, where it was thought that Clinton would attempt to play a mediatory role in resolving current tensions between India and Pakistan. No doubt, this was the earnest desire of the latter – that it could utilise the US president’s visit to further its own views and objectives particularly over the sensitive issue of Kashmir.

One may conclude that Clinton’s highly dramatic visit to India has been both a personal achievement and a landmark in relations between the two countries. It successfully steered clear of involvements in the internal politics of South Asia, and specifically the sensitive relations between India and Pakistan. The president’s view on these issues seems to be essentially that Pakistan should act with restraint and avoid causing provocation.

But it is evident that the real purpose of the visit from the president’s standpoint was to open a new era in US relations with India – and in a sense, enable the US to play a role in the future of South Asia through this relationship.

The comment by China’s foreign minister on this visit is revealing to the effect that his nation hopes that Indo-US relations will develop only in a manner to facilitate peace, security and stability in South Asia.

BY The late Deshamanya Dr. Vernon L. B. Mendis