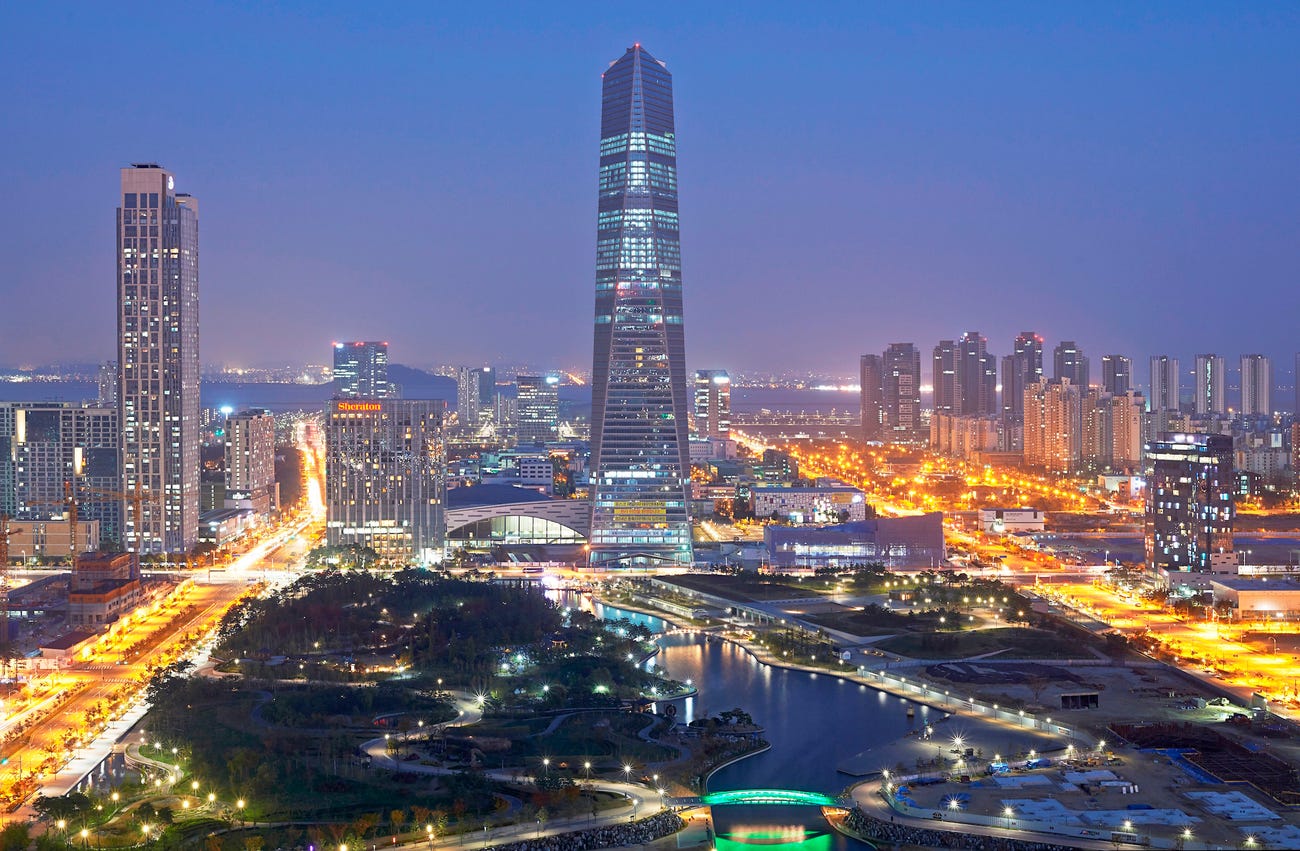 When residents of the International Business District (IBD) in Songdo, South Korea go to work, pick up their kids from school, or shop for groceries, driving is optional.

That’s because the $40 billion district — currently a work-in-progress about the size of downtown Boston — was designed to eliminate the need for cars.

A project that began in 2002, the area prioritizes mass transit, like buses, subways, and bikes, instead of road traffic, according to Stan Gale, chairman of Gale International, the developer behind the IBD.

When completed by 2020, the district will span 100 million square feet. It’s located on the northwest side of South Korea.

Take a look at the IBD’s plan below.

From the first planning stage, the developers aimed to make the district eco-friendly.

One strategy was designing the area to reduce the need for cars.

Apartment buildings and businesses were built 12 minutes within bus or subway stops.

Most non-residential buildings are walking distance from everything else.

Fifteen miles of bike lanes go through the district, connecting to a larger 90-mile network in Songdo City.

Around 40% of the area is reserved for green space (about double that of New York City), which also encourages residents to walk, Gale said.

“What you see today in Songdo, a city that is compact and very much walkable, is a direct outcome of this thoughtful approach to planning,” Gale said.

The IBD is one part of a larger development, called the Incheon Free Economic Zone in Songdo City, spearheaded by the South Korean government.

When the government started planning Songdo City in 2000, 500 tons of sand were poured into the marshland to lay the foundation.

Currently, 20,000 residential units are complete or under construction in IBD, where around 50,000 people live. Approximately 100,000 residents live in the greater Songdo City.

Another perk of living in the district: there are no trash trucks. Instead, a pneumatic tube system sucks the trash from chutes in residential buildings to a central sorting facility in seconds.

There, it’s either turned into energy or recycled.

IBD has over 100 buildings that are LEED-certified, the world’s most widely used green rating system.

The development is shooting for LEED certification at a neighborhood scale, and plans to recycle 40% of the water used.

Songdo City produces a third fewer greenhouse gases compared to another city of the same size.

However, some residents have complained that the IBD and the larger Songdo City are too remote from Seoul, the country’s economic, political, and cultural hub. It takes over an hour to reach the capital.

Around 70,000 people work in Songdo, which is far fewer than the 300,000 people the city government had envisioned.

For that reason, it could be too early to say whether Songdo will become a thriving urban center.

“In a lot of ways, it’s the city Koreans want to show the world, in that it’s a clean, futuristic-looking place with no visible poverty,” Colin Marshall, a Seoul-based essayist who writes about cities, told The Los Angeles Times.

When CityLab’s Linda Poon visited Songdo this spring, she spoke with residents who have had trouble building community in the new city.

“There’s a ton of people living here, but you don’t really see them,” one resident, Lindy Wenselaers, told CityLab. “So the city is alive, but it’s invisible.”

The IBD currently measures 60 million square feet. By 2020, it will nearly double.

The developers hope that the city will become a model for other cities around the world.