RISE OF THE ASIAN GIANTS

India and China are bent on what they consider legitimate aspirations 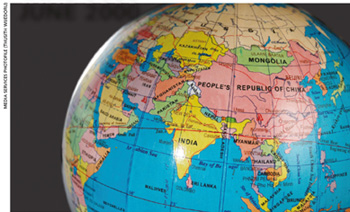 Recent political and diplomatic initiatives by India and China indicate that the two Asian giants are moving beyond the regional sphere and into the global arena. Developments in India’s foreign policy – especially its assertive stance – convey a different impression to what was known of it in the past.

It is pertinent to consider whether this represents a sea change in India’s diplomatic outlook in keeping with that noted in Western opinion. India’s foreign minister has affirmed that the movement must commit itself uncompromisingly to democracy, the rule of law and the preservation of fundamental liberties.

By coincidence, China is also emerging at the forefront with bold and aggressive thinking and approaches. Its current preoccupation is with Taiwan because the new Taiwanese leader Chen Shui-bian has declared an unwillingness to accept China as the legitimate ruler of Taiwan.

China has also demanded that the US government should prohibit all sales of advanced weapons to Taiwan, in accordance with solemn commitments it has made in the past. In this case, Taiwan can be considered the equivalent of Pakistan to India. Therefore, this is a hypersensitive issue and a threat to peace in Asia as much as Kashmir is.

Another sensitive issue for China is the Dalai Lama. Recently, Beijing opposed a meeting between the Dalai Lama and the Danish premier. In contrast, Japan has pointedly refused to permit the Dalai Lama to engage in any political discussions on his forthcoming visit to the land of the rising sun.

A crisis appears to be looming in Sino-US relations over arms control and non-proliferation. The US is inviting China to reopen talks on non-proliferation with a view to discussing the latter’s reported exports of technology for chemical and nuclear weapons, and ballistic missile programmes to Pakistan and Libya.

A striking feature of China’s present diplomacy is its widening approach to acknowledge new vistas. A case in point is the visit of President Jiang Zemin to Israel where he discussed an arms deal to supply hi-tech aircraft reportedly valued at US$ 250 million each.

In response to US complaints regarding this arms deal, Foreign Minister David Levy denied that Israel was acting inappropriately.

Another virtual diplomatic triumph for China was the recent visit to South Africa
(the first of its kind) by Jiang and the epoch-making Pretoria Declaration which he co-signed with South African President Thabo Mbeki.

The declaration called for a new world order in which the two governments would work with each other to ensure that in this new international, political and economic milieu, no country should dominate others. It also declared that the negative effects of globalisation should be reduced.

These bold and widespread diplomatic initiatives by India and China cannot be regarded as mere coincidences. They represent increasing self-confidence and aspirations of playing a global role. As to the precise timing of these developments, it is customary to think that in the case of India, it was the effect of US President Bill Clinton’s recent visit.

However, the most important feature of these initiatives is the image they project of India as a global power – in the words of British Foreign Secretary Robin Cook, it is “a big player in the international arena.” This would be affirmed by a permanent seat on the UN Security Council, which is all that’s needed to give India a place in the sun.

It is no exaggeration to say therefore, that both India and China are at the moment in the midst of a kind of limb loosening exercise – testing their potential and endeavouring to reach out for what they consider to be legitimate aspirations.

In essence, it means moving outward from a regional and local scenario to a global milieu. This is a signal of the advent of regionalism in Asia.

And it’s  possible to view this as the emergence of two superpowers in Asia with the prospect of confrontation. But what’s more important is that it is really a message to the outside world.

« FROM WHICH SUBURB CAN YOU GET TO COLOMBO THE FASTEST?
BURNING ISSUES »