HONG KONG/SINGAPORE (Reuters) – Global investors in Asia are sticking with bets on China’s recovery and holding off on major portfolio changes as early results show a tight U.S. presidential election.

President Donald Trump holds a narrow lead in the battleground state of Florida, keeping open a path to the White House, which has upended expectations of a Joe Biden landslide.

“I don’t think you’d be buying anything if the result’s uncertain, because you have a binary outcome,” said Matt Sherwood, head of investment strategy at Perpetual in Sydney, which manages A$29 billion ($21 billion) in assets.

For weeks, market moves had indicated investors were betting on a “Blue Wave” by which Biden wins the White House and Democrats control both houses of Congress.

That was expected to bring big stimulus spending along with higher yields on the government debt to pay for it, while foreign investors reckoned on freer trade and a weaker dollar directing capital to emerging markets.

Yet as results came in during Asian trade on Wednesday, bonds rallied and the dollar soared amid the uncertainty. Fund managers outside the United States, meanwhile, said they were sticking with investments that could withstand any electoral outcome.

“Asia has also been our preferred region before the election and the outcome of such should not materially alter the region’s economic recovery. We remain constructive on the region on a medium-term outlook.”

Asia’s equity markets were steady or gainers on Wednesday, though most currencies fell against the rising dollar. 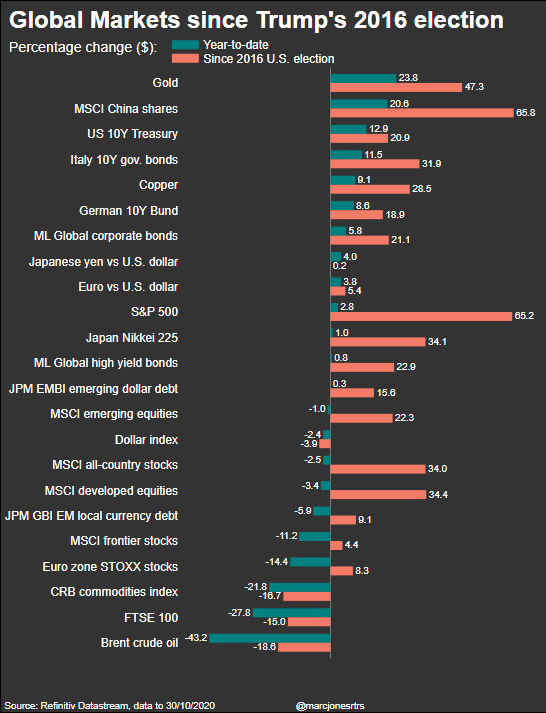 China is seen as particularly sensitive to the election outcome because Trump is viewed as far more likely to set off new and unpredictable confrontations with the world’s second-largest economy.

The yuan sold off sharply as Trump’s chances appeared to improve through Asia’s trading day, though money managers invested in China did not expect the turbulence to last.

“Once the dust settles … the market will go back to focusing on the long-term implications of the winner’s policies,” said Lei Wang, portfolio manager at Thornburg Investment Management in New Mexico.

Indeed, that has put a solid footing under company earnings and pushed China’s blue chip index up about 16% this year compared to a 1.4% drop for world stocks more broadly – something investors think has further to run.

“We’re not trying to trade the election, it’s too difficult,” said Vikas Pershad, a Singapore-based fund manager at M&G Investments.

“The U.S. share of (global) GDP has very steadily fallen (in my lifetime). Where has it gone? It has come to Asia. I don’t think that will change.”

Graphic – How emerging market currencies have fared over last 4 years: 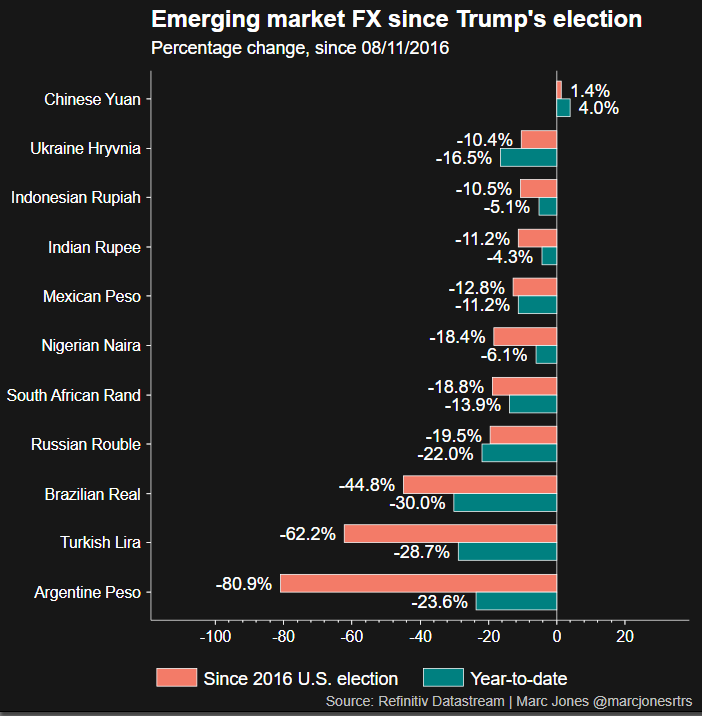 « INDIA IN THE RUNNING TO BECOME NEXT BIG HUB FOR COVID-19 VACCINE PRODUCTION
USA PRESIDENTIAL ELECTION: WHY WE DON’T KNOW THE RESULTS »