Sivakrishnarajah Renganathan calls for a revamp of recent regulatory norms

The profitability of the local banking sector declined in financial year 2018/19 mainly due to a deterioration in asset quality, an increase in operating costs and higher taxes. The Central Bank of Sri Lanka (CBSL) strengthened prudential policy measures including the implementation of Basel III requirements and adoption of Sri Lanka accounting standard SLFRS 9 in the year. 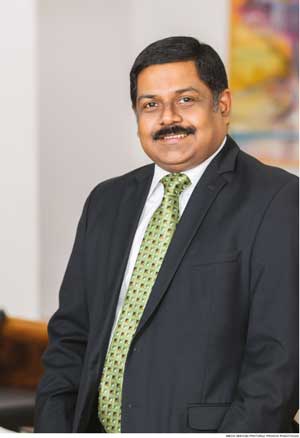 Veteran banker Sivakrishnarajah Renganathan believes that the sector is experiencing a somewhat challenging period in view of changes to the regulatory framework.

He notes: “The Basel III and IFRS 9 requirements, and increased taxes, have impacted the banking sector. Certain tax waivers were removed but in October 2018, the Debt Repayment Levy was imposed on financial institutions. This levy amounts to approximately 20 percent of banks’ profit after tax, which is a substantial share. In addition, lower GDP growth in the financial year also impacted the sector.”

CHALLENGING TIMES As far as Sri Lanka’s private sector banks are concerned, most meet Basel III requirements although compliance has proved to be a challenge for some, Renganathan states.

He elaborates that sector growth was affected primarily by the economic slowdown – and this in turn impacted lending growth and the servicing ability of borrowers, which caused non-performing loans (NPLs) to rise.

“Advances were not growing while rising NPLs and impairment costs challenged banks when it came to maintaining profitability. The banking sector’s return on equity (ROE) declined to single digits compared to 15 or 16 percent in the past,” Renganathan observes, adding that “lower sectoral profits in 2018 were reflected in a drop in the return on assets (ROA) and ROE.”

Lauding the banking sector’s contribution to GDP, Renganathan elaborates: “The country receives substantial investment in the stock market through the banking sector but foreign investor confidence weakens when there is a major impact on the profitability of this sector.”

“We have been talking to regulators and ministerial level officers to phase out or relax some regulations so that the sector does not feel the full impact of these regulatory changes,” he adds.

VOLATILE ENVIRONMENT Last year, the currency fluctuation was substantial with the Sri Lankan Rupee depreciating by nearly 20 percent. However, the rupee has stabilised in 2019 and is being managed well.

Amidst tight liquidity conditions and the monetary policy stance maintained until April 2018, most market lending and deposit rates of commercial banks remained high. Interest rates were managed by CBSL to ease monetary policy through rate cuts with an additional effort to introduce a maximum cap on interest rates for banks and non-banking financial institutions. These measures served to reduce interest rates further.

As for the microfinance sector, it faced challenges due to loan waivers introduced by the government during the year.

Renganathan suggests that “the sector requires a more focussed study to understand the challenges. And the regulation of unlicensed and unregulated lending entities needs to be addressed urgently.”

“These unregistered institutions pose a threat to the microfinance sector as they charge high interest rates and remain unchecked. Unfortunately, many borrowers at the grassroots level do not have the required financial literacy to separate the grain from the chaff. Loan waivers should be offered only in times of natural disasters,” he recommends.

“Unfortunately, we’ve seen policies changing drastically in the recent past. Policies affecting foreign investors need to be more consistent because we must attract foreign investments. Corporate taxes too have to be lowered to draw investors and the tax regime must be reasonable. We need to have a long-term and sustainable national policy irrespective of party politics,” he asserts.

Furthermore, the capacity of local banks to raise debt capital was affected last year by the downgrading of Sri Lanka’s sovereign rating along with a lower ‘ease of doing business’ ranking. Following the increased political uncertainty at the end of 2018, major rating agencies revised the country’s sovereign rating.

Accordingly, Moody’s Investors Service revised Sri Lanka’s sovereign rating to ‘B2 (stable)’ from ‘B1 (negative).’ In addition, both Standard & Poor’s and Fitch Ratings lowered Sri Lanka’s sovereign rating from ‘B+ (stable)’ to ‘B (stable).’ This could be attributed to the perceived heightened external refinancing risks, an uncertain policy outlook and the risk of a slowdown in fiscal consolidation arising from the political uncertainty at the time.

THE FISCAL OUTLOOK Looking ahead, Renganathan posits: “At present, the economy is down and it seems likely that we may not have a budget but a vote on account this year, which will not help accelerate economic growth until the election scheduled for 2019. We’ll feel the impact until the first half of next year.”

“The 21 April incident set the country back many years and unfortunately, the aftermath wasn’t managed well enough to mitigate the economic impact. Banks have been asked to offer moratoriums to SMEs and corporates but it will prove even more difficult for these entities when repayments are due next year,” he warns.

Renganathan believes that the banking sector has strengths such as resilience despite the challenges. The sector is also reasonably capitalised and well regulated. Despite the downturn, the ROE remains fairly reasonable, he says.

And while recession is raising its ugly head on the global front, Renganathan professes not to be too concerned. “It can be viewed as an opportunity for a country such as Sri Lanka, which will not be impacted in a major way. A global recession will only have a minor impact – and Sri Lanka has ample resources and industries such as tourism to mitigate any impact,” he affirms.