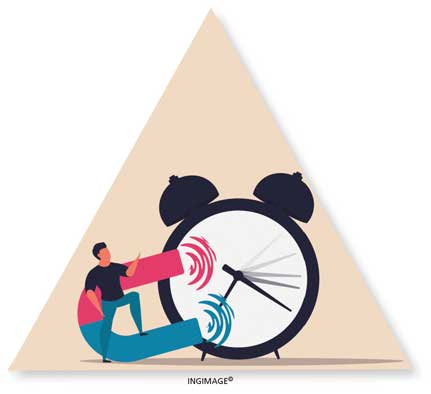 Teenage patterns of behaviour have been catalogued and dealt with extensively. However, one must remember that the objects of such discussions are highly variable – namely, children. While general guidelines help parents who are caught in the uncharted territory of adolescence, they’re not always workable.

So let’s consider one or two examples of middle school teenagers who have been driving their mothers to distraction.

“What am I to do?” Mrs. W begged me, after my regular complaint about Dino’s unpunctuality.

“I can’t wake him in the morning. He won’t study when I tell him. He won’t eat anything that is cooked at home. His room is a mess. I’m at my wit’s end!” she lamented.

Dino is not a bad student – albeit a rather happy-go-lucky one. He represents about half the teenage body in its various stages of behaviour.

I do have a few suggestions.

“If you can’t wake him, why not turn off the fan in his room, and stop that early morning hour orange juice and the gentle cooing you do.”

“He is 14 and will be in the upper school next year. So treat him as an adult.”

A few words in Dino’s father’s ear helped enormously. The next time warnings didn’t work, Dino had no car in which to get to school.

“He can use the bus,” his father told his upset mother. “If he isn’t ready on time, he gets bus fare and no tuck shop money for breakfast,” he said. And knowing Dino’s mother’s habits, he added: “And you are not to slip him anything on the sly.”

“You would! And spoiling him will make everything worse,” he told her, grimly.

This scenario can be replicated in almost every home with a son at a private school. Mothers are pushovers for the wiles of boys. This is an Asian habit, which many foreign principals have commented on. At international schools, girls tend to dominate the prize list. Not receiving special treatment, they work harder and punctuality comes naturally to them.

Basically, the one parental fault is that there is too little family time. There must be a special time for children daily. This family time should be a happy experience wherein everyone interacts, daily doings are talked about and advice can be given (and taken). My favourite suggestion for this family togetherness is at dinnertime. All sorts of matters are discussed when parents are relaxed, homework has been hopefully done and the day is winding down.

I noticed my Tamil pupils often came to school with holy ash on their foreheads; and I was told that 10 minutes before breakfast, the family met to pray and worship. It was a wise father or mother who insisted on this. A certain moral tone was set and it paid off unfailingly.

All the psychiatrists in the world can’t beat wise parenting. The outcome of such parenting is that everyone is happier. Children are not unhappy because of sensible house rules – but nothing can be worse than parents denying children their time and daily attention because of social activity.

Children get lonely and difficult, and parents must sacrifice some part of their social lives during those traumatic teenage years.

Teenage rebellion is a given. The best parents can have difficult children. But it is amazing how seldom one finds a rebellious teenager in an understanding home.

Let me make a clearly understood distinction between laxity and understanding. Laxity leads to spoiling – and the latter leads to demanding teenagers who think they have rights but no duties.

I told one weeping mother: “What do you mean, he won’t listen to you? You feed, clothe, educate and shelter him. He has absolutely no right to disobey you.”

I hoped she had listened.

She must have listened – because four years later, the young miscreant took off to university where apparently he was coping somehow without his old ayah at home waking him up with an iced orange juice, ironing his clothes, making the bed and virtually dressing him for school.

His professor’s letter to his parents caused his mother’s mouth to drop open in shock.

“Dino is a great guy. He cooked a wonderful Sri Lankan dinner for us last week and keeps his grades up with hard work,” the professor wrote.

“How did he cook?” his mother asked as she showed me the letter with an unbelieving look, which was permanently on her face. “He didn’t know the difference between salt and pepper!” she claimed.

“They adjust when necessary. Are you very surprised?”

“Well, his father is taking all the credit after bullying the poor boy so much.”

A look of alarm crossed her face. “Varun will be 14 next year. How do I go through all this again?” she asked.

“Cheer up. You are now prepared,” I told her.