It was people, not planes, made expendable.

Cathay Pacific CEO Rupert Hogg and no. 2 executive Paul Loo resigned last Friday, essentially to appease Chinese authorities. While it will take time for management to recollect – and there may be further changes – Cathay’s operations remain intact.

Not so for other airlines: mainland regulator CAAC forced Air China to reduce Boeing 737 capacity by 10% after a pilot smoking in the cockpit accidentally caused a flight to rapidly descend. CAAC had Okay Airways cut flights by 20% after pilots were overworked, and there is a regular list prohibiting airlines and airports from adding flights if on-time performance is too weak. Emirates could not expand for six months due to CAAC safety violations. State-owned travel agencies have been told to stop selling tickets to countries during political spats.

Those were relatively small and temporary changes. There was more at stake for Cathay – and its major shareholder. Cathay has a wide network to China and needs Chinese airspace to access other destinations, but financially Cathay is a comparatively small play for 45% owner Swire. Cathay is Swire’s flagship, and is deeply liked by the family, but Cathay’s recent 1% airline margin contrasts to Swire’s US$13 billion investments in mainland China, notably in high-return areas like real estate.

That exposure made Cathay a bargaining chip, evidence of Beijing’s capability if protests in Hong Kong did not end. Cathay was in a paradox: punished for not taking a hard enough line even though the airline privately scoffed in June as the protests were gaining momentum yet were still mostly peaceful and authorised. That was a more conservative view than the CAAC’s focus on illegal protests.

“Could we have managed things differently? In hindsight, ‘Yes,’” Hogg was widely quoted telling staff about the resignations. Hindsight is the keyword.

Cathay expected protest unrest to be handled by the Hong Kong government, which favours politically quiet companies. Hong Kong business culture, and at Cathay especially, is to err on the side of reserved. Mainland Chinese media wanted thumping statements, and when Beijing seemed to take an intervening role – Hong Kong companies suddenly started advertising patriotic messages in newspapers – Cathay was given no time to adapt; it was to be made an example.

A propaganda campaign against Cathay was long underway. It blended the trivial, conspiratorial and patently false to portray Cathay having a systemic safety problem while the mere presence of foreign employees created an anti-China mindset in the company. Chairman John Slosar acknowledged this spotlight on safety, saying in a statement, “recent events have called into question Cathay Pacific’s commitment to flight safety and security and put our reputation and brand under pressure. This is regrettable as we have always made safety and security our highest priority. We therefore think it is time to put a new management team in place.”

Cathay has a history of colliding with other aircraft and of pilots smoking in the cockpit, state-backed newspaper Ta Kung Pao stated with no evidence. (There is evidence of cockpit smoking at mainland Chinese airlines.) The newspaper also claimed Cathay’s Loo marched with staff at protests, which is untrue. 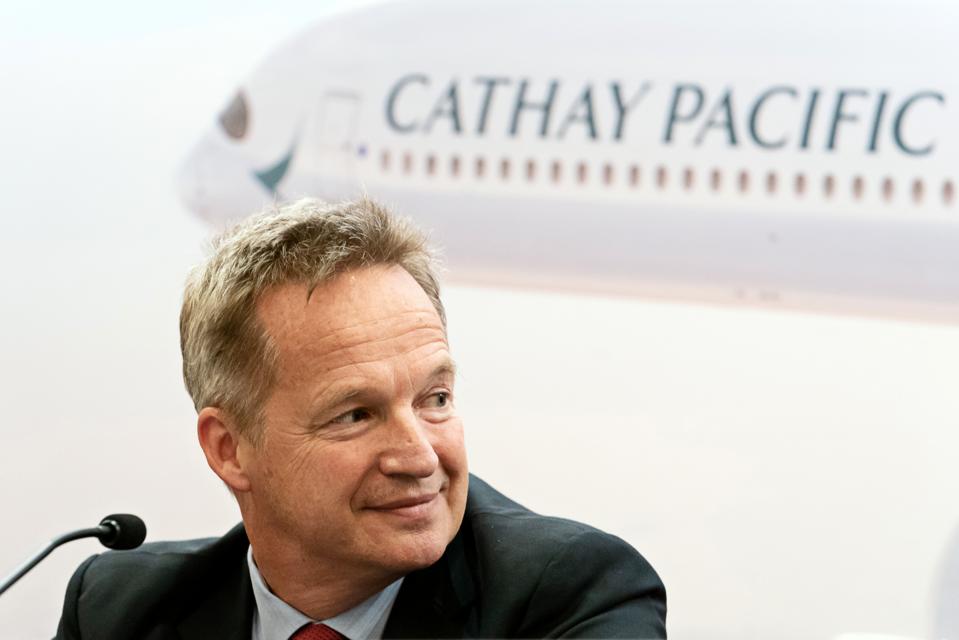 National broadcaster CCTV partially attributed the clampdown on Cathay by highlighting how its in-flight entertainment system made reference to “Hong Kong, Hong Kong” and “Taipei, Taiwan” instead of saying the cities are in “China.”

Nationalist ire was also drawn when a Cathay pilot made a pre-landing announcement on July 26 notifying passengers there were protestors in the arrival hall and passengers should consider talking to them. This was during a peaceful protest approved by the police.

A central argument was pilot risk, brought on by the arrest of an off-duty Cathay pilot at a July 28 protest. Hong Kong media quickly claimed the pilot was suspended, but Cathay initially did not comment, citing privacy rights. It relented after the August 9 safety notice from mainland regulator CAAC prohibited Cathay employees from participating in illegal protests. Cathay disclosed on August 10 the pilot had been suspended from July 30 and had not flown since July 15.

The changed stance traded off Cathay’s values and morals, staff feel. In an apparent bid to appease mainland relations, Cathay fired the pilot even though he had yet gone to trial, further inflaming staff views on company ethics. The calculation was different online. The day before Cathay confirmed the pilot had already been suspended, broadcaster CGTN said the pilot was allowed to fly. (CGTN is registered in the US as a Chinese agent under anti-propaganda law.)

On Weibo, user “Jeune”, with almost a million followers, said allowing the arrested pilot to continue flying showed “Cathay is incapable of making such factual judgments and incapable of eliminating risks.” The fact was incorrect, but the statement remained.

Conspiracy theories developed that Cathay pilots could use aircraft as destructive weapons in China. This seems to have originated with Global Times, which quoted a government researcher saying: “The civil aviation industry is special, because if an airline is not trustworthy, it will generate huge risks…We cannot forget the September 11 attacks or the missing Malaysia Airlines flight.”

Yet the 9/11 attacks were the result of hijackers; airline pilots tried to fight them off. The reference to missing Malaysia Airlines flight MH370 appears to rely on a conspiracy that a pilot doomed the jet for a specific purpose – but failed to communicate the objective.

The argument about Cathay pilots required a mindset that the protests are anti-China. But a Chinese University of Hong Kong survey of protestors found the largest objectives for protestors was the complete withdrawal of the extradition bill and to express dissatisfaction with how police handled previous protests. The popularly chanted “Five Demands” do not make any reference to mainland China.

But the conspiracy held. Online commentary about Cathay made reference to 9/11 and MH370. Statements became even more outlandish. One user called for intervention from China’s armed forces, the People’s Liberation Army (PLA), saying any flight that had “staff or passengers who have joined such protests…PLA can be allowed to shoot the jet down with no mercy.”

That statement was made in a reply to a post on the official Facebook page of Leung Chun-ying, who was Hong Kong chief executive from 2012-2017. He accompanied Cathay executives on an aerospace tour of Toulouse, flew on Cathay’s inaugural flight to Boston, and was the honourable guest at four of Cathay’s community flights for less-advantaged Hong Kong families. He was photographed with Cathay’s CEOs of the time, John Slosar and Ivan Chu. He now has a job in the mainland government, but was apparently not a voice of reason for the airline he once knew so well.

The propaganda campaign against Cathay included xenophobia. “A large proportion of Cathay Pacific pilots are from Western countries…Therefore, the colonial elite consciousness has a market within Cathay Pacific and there is prejudice and discrimination against the mainland,” CCTV wrote.

Global Times called out Cathay’s “UK background” as Beijing warned foreign governments not to interfere in Hong Kong and blamed foreigners for organising the protests. The Hong Kong police last week said they found no such evidence.

Global Times did not mention that Cathay’s 30% shareholder is flag carrier Air China with four seats on Cathay’s board for its chairman, president, CFO and VP. Cathay has worked extensively to help Air China develop, facilitating training management and giving advice on topics small to large, like how to create joint-ventures. Yet that relationship and Air China’s clout did not prevent the resignations.

Mentioning Cathay’s “UK background” could signal Global Times thought partially-foreign companies should be especially sensitive. It also fuels the long-running view that Beijing is displeased Cathay is not totally in Chinese hands, and was looking for reasons to exercise greater control. That theory was played into in March, when HK Express shareholder Zhong Guosong told local media he opposed HK Express’ sale to Cathay partially because Beijing did not want another Hong Kong carrier under British-linked Cathay.

Seldom mentioned from mainland media was widely-quoted remarks in the western press from Slosar about his staff, saying on August 7: “We certainly wouldn’t dream of telling them what they have to think about something.”

His comment was inaccurately framed as what he thought of staff protesting or if he would rein in staff participation at legal protests. However, the actual question put to him was if he would provide staff with legal assistance and what advice he had for staff attending protests. His full answer included: “I’m not sure that we can give them any advice that would be particularly helpful.”

Cathay used its normal low-key business framework that assumed people understood illegal protests were prohibited, and joining an authorised protest was enshrined as a choice in Hong Kong civics. Slosar sought to remind that Cathay was a mere provider of service, not a political organiser. He said of staff, “We trust them to be the service professionals that they’ve always been and to support what we try to do as Cathay Pacific, which is to serve our customers.”

Staff relations have historically been a difficult balance between Cathay management and the Hong Kong government, which does not own or run Cathay but has afforded opportunities to it. In return, the government expects Cathay to generate good-paying jobs for Hong Kongers; its cabin crew earn more than at Hong Kong Airlines. Over the years, this afforded a sense of protection amplified by a strong cabin crew union, leading management to be careful of micro-managing, such as if Slosar’s remarks reminded staff of the obvious: not to behave illegally. The CAAC’s safety notice quickly imposed a different culture of expectations, and one that required management change.

Another propagandist summarised the turn of events. Sina Finance wrote, “The evidence has been made, the central media has spoken.”