Business sentiment forges ahead in a largely speculative economic milieu

More ‘surprises’ seem to be in order for Sri Lanka’s corporate sector, with the latest coming in the form of further amendments to an already battered and bruised tax regime. In mid September, the Cabinet approved the proposed amendments to the Value Added Tax (VAT) Bill, which would raise the VAT rate to 15 percent – this will affect telecom services, tobacco, air ticket fees and selected private medical services.

At the same time, the VAT threshold on retail and wholesale trade was increased to a value exceeding Rs. 50 million a year – whereas, according to the previous draft bill, this threshold was to be reduced to three million rupees a quarter.

In July, the Supreme Court issued an interim order preventing the Government from implementing the four percent VAT rate hike, until the consent of the Cabinet and Parliament was obtained.

The results of the latest LMD-Nielsen Business Confidence Index (BCI) survey, however, seem to paint a more positive picture – although this could have more to do with the timing of the VAT announcement vis-à-vis the survey period (i.e. first week in September), reasserting the volatility in corporate sentiment that can be created on account of ad hoc policy measures.

THE INDEX For the second consecutive month, the BCI has moved in a northerly direction, to reach 150 in September. During this time, the index has gained as many as 24 basis points, to surpass its average for the last 12 months (146) and edge up towards the 158 mark recorded in October last year, following the formation of the National Unity Government.

Commenting on September’s noteworthy uptick of 10 basis points, Nielsen’s Managing Director Sharang Pant says: “The reversal [at the time of the survey] of the proposed increase in VAT and revival of large infrastructure projects seem to have done the trick… Businesses felt, at the time, that these steps will help improve the economy… and help attract more investment.”

Pant also notes that “inflation and increasing interest rates remain concerns, but business leaders feel that more transparency and communication from the Government, regarding its intentions, will create a more positive environment…”

Stock market analyst and LMD columnist Hasitha Premaratne also notes, in this edition of the magazine, that the mega project developments in the pipeline “signify a strong fundamental backing for sustainable economic growth, and are being viewed positively by investors.” 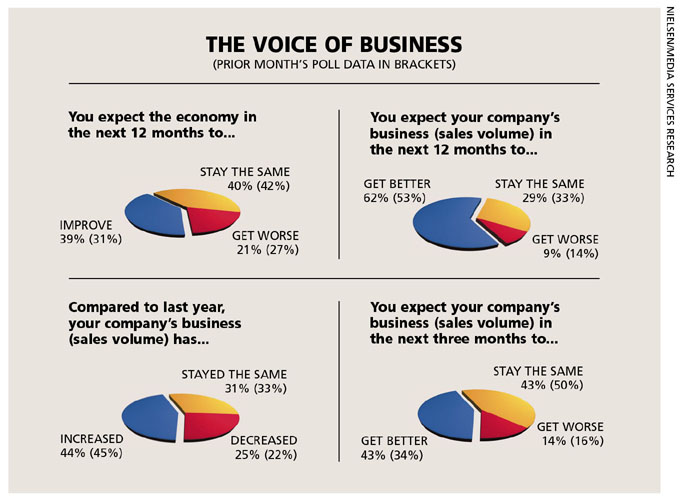 THE ECONOMY Businesspeople appear to be more optimistic about Sri Lanka’s economic prospects than in the recent past, with nearly four-in-10 respondents asserting that the economy ‘will improve’ in the next 12 months, while a similar number expect conditions to ‘stay the same’ and 21 percent hold a negative outlook.

A corporate executive observes that “the economy seems to be moving in the right direction,” while another concurs: “Market conditions seem to be picking up, which is a good sign for the economy, moving forward.”

However, another survey respondent points out that “there needs to be a mechanism in place to allocate government resources more efficiently, so as to reduce wastage, which will directly benefit the economy.”

BIZ PROSPECTS Sixty-two percent (versus 53%, in the prior month) of those polled say their companies’ business will improve in the next 12 months. Notably, less than 10 percent of the survey sample expect sales volumes to deteriorate over this period, whereas almost three-in-10 foresee the status quo being maintained.

INVESTMENT A majority (48%) of those consulted by the pollsters opine that the current investment climate is ‘fair.’ Conversely, only 26 percent of businesspeople view prevailing investment conditions in a positive light, and almost as many give the country’s funding prospects the thumbs down.

“With the upcoming investment projects, things look to be picking up… There seems to be more optimism now, with more foreign funds coming into the country,” remarks a businessperson.

However, another member of the corporate community states that “investors are reluctant to invest, as the only information available on the investment climate is through the media.”

This view is corroborated by another respondent, who remarks: “There seems to be a reluctance to invest. With the state of the economy as it is, as well as increased taxes, there does not seem to be any effort to invest, on the part of individuals or corporates.”

SENSITIVITIES Commodity prices and the job market, as well as the value of the rupee, are additional issues highlighted by businesspeople, in terms of what the Government needs to focus on, to put the economy back on track.

Moreover, as a corporate executive asks, “if the general public does not have money to spend, how can the Government expect business to do well?”

PROJECTIONS It is worth reiterating that the latest BCI records the sentiment gauged in the first seven days of September, so it does not reflect the VAT amendments announced a week later.

This new tax burden – along with the prospect of Budget 2017 looming on the horizon, which could mean ‘more of the same’ – is likely to have an impact on business confidence, going forward.

It goes without saying that the BCI outlook seems to be downbeat, although it could well be that the hype created by Sri Lanka’s upbeat development agenda may fill any void in business sentiment.