The end is near for the Airbus A380 superjumbo jet. Here’s how it went from airline status symbol to reject in just 10 years 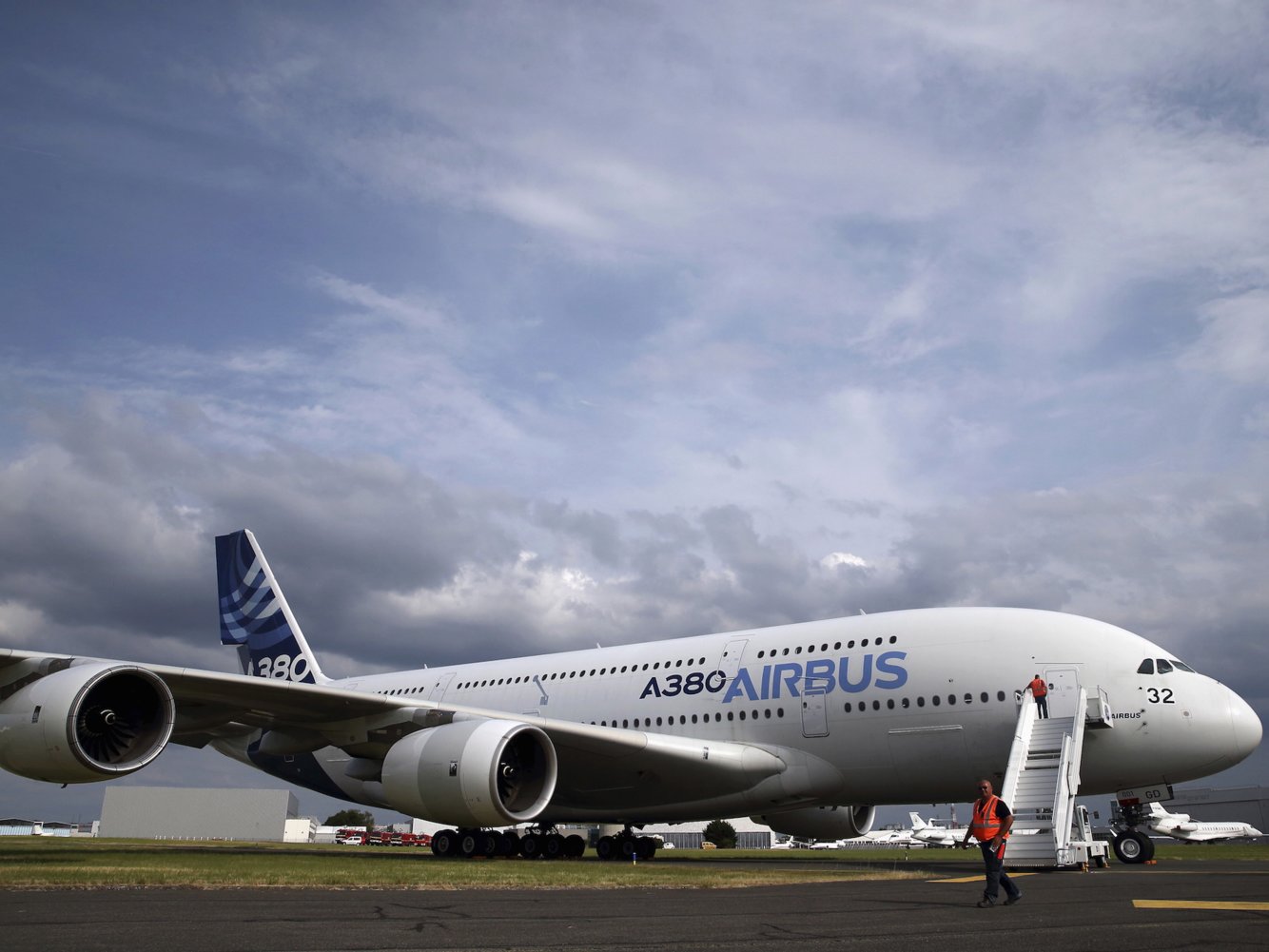 The end is looming for the Airbus A380, following Airbus’ announcement earlier this year that it will end production of the double-decker in 2021.

Things were much different back in 2007 when the Airbus A380 entered service to great fanfare. The gargantuan jet, dubbed the superjumbo, was designed to take everything that made the Boeing 747 an icon and push it to the limits of modern engineering.

The superjumbo hasn’t been the game changer Airbus had hoped it would become when the massive jet was conceived two decades ago. This is especially the case on the financial front.

For much of the plane’s life, Airbus has struggled to find airlines willing to put the A380 into service.

With a price tag of $445.6 million, the A380 is one of the most expensive and lavish airplanes ever built. With room for as many as 800 passengers, the double-decker’s sheer size means it’s an occasion whenever a superjumbo arrives.

But in a cost-conscious market and with fluctuating fuel prices, the very attributes that made the plane stand out may have also doomed it. Some say the A380 came two decades too late, while others say that with increasing airport congestion, the plane is ahead of its time.

Some industry observers, such as the Teal Group analyst Richard Aboulafia, have gone so far as to call it the biggest mistake in the history of Airbus. According to Aboulafia, the A380 is a poorly executed aircraft designed for a market that doesn’t really exist. As a result, the $25 billion that Airbus spent on the A380 program could have been better used elsewhere, like on a rival for Boeing’s next-generation 777X or on a true replacement for the aging Boeing 757, Aboulafia told Business Insider.

“It’s painful, but in the long run, it’s best,” Aboulafia said regarding the end of the A380 production run.

The plane is a polarizing machine, with some viewing it as an eye-sore, and others as a testament to the marvels of modern engineering.

Here’s a look at the topsy-turvy history of the Airbus A380 superjumbo.

As the superjumbo took off from Airbus’ facility in Toulouse, France, the largest commercial airliner around was actually flying.

During the 1970s, Airbus’ A300B was the new kid in the world of commercial airliners.

It spent the decade trying to break into a market dominated by the Boeing 747 jumbo jet.

By the early 1990s, Airbus was in a much different position. Its narrow-body A320 family, which helped pioneer civilian fly-by-wire technology, was well on its way to becoming the second-best-selling jetliner in history.

At the same time, the company unveiled its new A330 …

… and A340 family wide-body jets. The two jets offered viable alternatives to Boeing’s 767 and 777 wide-bodies. Now, Airbus has set its sights on a bigger target …

… the Boeing 747-400. Airbus wanted to produce an aircraft even bigger than Boeing’s latest jumbo jet — with lower operating costs.

The result was a double-decker concept called the A3XX.

The A3XX would eventually morph into the A380 superjumbo.

The A380 is built in a 1.6-million-square-foot assembly plant at Airbus headquarters in Toulouse.

According to Airbus, in a typical four-class seating arrangement, the superjumbo can carry as many as 544 passengers, with a range of more than 9,400 miles. In a high-density configuration, the A380 is certified to carry as many as 868 passengers — 538 on the main deck, 330 on the upper floor.

Power for the A380 comes from a quartet of engines from suppliers Rolls-Royce and Engine Alliance.

The A380’s flight crew operates from a state-of-the-art glass cockpit. Like all modern Airbus jets, the aircraft is flown using a side stick, with a fly-by-wire control system.

After its maiden flight, the A380 completed a flight-test program before entering commercial service in 2007.

As an airliner, the A380 promised luxury and comfort on an unprecedented scale.

The Airbus jumbo delivered, at least to airlines that wanted to take advantage of luxurious options. Premium features, such as walk-up bars …

… and bathrooms with showers set the superjumbo apart from its rivals.

And then there are the first-class suites that Emirates offers …

… the even larger first-class suites that Singapore unveiled …

… and Etihad’s The Residence.

On October 15, 2007, Singapore Airlines took delivery of the first production A380.

Soon, other global airlines, such as Korean Air …

… and Etihad took delivery of the plane.

Portugal’s HiFly became the first airline to operate a second-hand A380 when it took delivery of an ex-Singapore Airlines jet in the summer of 2018.

Japan’s All Nippon Airways recently became the latest airline to introduce the A380, which it flies between Tokyo and Honolulu, HI.

Why does Emirates love the A380 so much, at a time when most of the airlines in the world have stayed away?

Emirates is a predominantly long-haul international airline whose business is built around funneling millions of passengers through its palatial central hub in Dubai and then on to destinations around the world.

As a result, Emirates needs an aircraft that can carry a lot of passengers for very long distances — a perfect job for the A380.

But few airlines use Emirates’ strategy. These days, the trend in the industry is to offer direct flights using smaller long-range aircraft.

Instead of Emirates’ dedicated hub-and-spoke route model, most airlines have moved towards more point-to-point flying. This has allowed smaller, more efficient twinjets like the Boeing 777 …

… and the Airbus A330 to become the dominant forces in long-haul flying.

Smaller next-generation composite wide-bodies like the Boeing 787 Dreamliner offer airlines more flexibility and less risk. According to the CEO of Qantas, Alan Joyce, it costs less to operate two Dreamliners than it does to fly a single A380.

As a result, the A380 never developed into a true workhorse like the 747. Instead, it has been relegated to a niche aircraft economically feasible only on routes with heavy airport congestion.

Boeing has similarly all but given up on the 747-8 as a passenger jet. Only the freighter version remains in production, at a rate of just one plane every two months.

Boeing expects the next generation, twin-engine 777X to be its new flagship.

With early production A380s coming to the end of their 10-year leases, Airbus will likely have to contend with competition for its own used planes. However, early signs for the second-hand market aren’t promising. German investment firm Dr. Peters Group has decided to sell its off-lease A380s for spare parts after it couldn’t find any takers for the plane.

Emirates Airline president, Sir Tim Clark, has for years pushed Airbus to make a more cost-effective version of the plane with upgraded aerodynamics and a new fuel-efficient engine called the A380neo. That hasn’t happened.

Airbus has been reluctant to invest the kind of money needed to develop a new version of the A380. In 2017, Airbus offered its customers a moderately updated version of the plane, called the A380 Plus, with room for 80 more people and new winglets for better fuel economy. So far, there have been no takers.

Unlike with the Boeing 747, the A380 freighter never came to fruition, so Airbus won’t be able to subsist on sales of a cargo variant while it waits for passenger-plane sales to rebound.

In January 2018, Emirates ordered 20 additional A380s that would have kept the A380 production line moving for the next decade.

However, that deal fell apart. In the end, even the A380’s most loyal customer couldn’t hold on any longer. Emirates cut 39 A380s from its original order of 162 planes and bought smaller twin-engine Airbus A330neos and A350s instead.

Even though A380 production ends in 2021. The planes are expected to fly on for years to come. So, if you’re still hoping to fly on one, you have plenty of time left.