For the fourth consecutive year, Ernst & Young (EY) dominates the LMD 100 auditors league with 45 sign offs to its credit, which is one higher than its tally in the previous edition.
EY was appointed to audit the financial statements of the LMD 100’s top five entities in financial year 2020/21 – viz. Hayleys, Expolanka Holdings, LOLC Holdings, Commercial Bank of Ceylon and John Keells Holdings.
As in the prior edition, KPMG takes the first runner-up spot, having signed off on 39 statutory audits in 2020/21 – one higher than in the prior year. Hatton National Bank, Carson Cumberbatch, Bukit Darah and CT Holdings, which feature among the top 10 LMD 100 companies, appointed KPMG to audit their financials for the year in question.
EY and KPMG serviced a combined 84 LMD 100 corporations in the period under review, which represents a marginal increase from their previous year’s cumulative tally of 82.
PricewaterhouseCoopers (PWC) is a distant third, having audited seven LMD 100 financial statements in 2020/21 (versus eight in the previous year). Among them is Dialog Axiata, which claims a notable presence on the LMD 100 Leaderboard.
So three of the ‘Big Four’ global audit firms served more than 90 percent of Sri Lanka’s 100 leading listed companies in financial year 2020/21.
Meanwhile, the Auditor General’s Department signed off on five LMD 100 audit reports while BDO Partners, B. R. De Silva & Co., Baker Tilly Edirisinghe & Co. and Kreston MNS & Co. also feature in the 2020/21 auditors league – with one LMD 100 scalp to their name respectively. 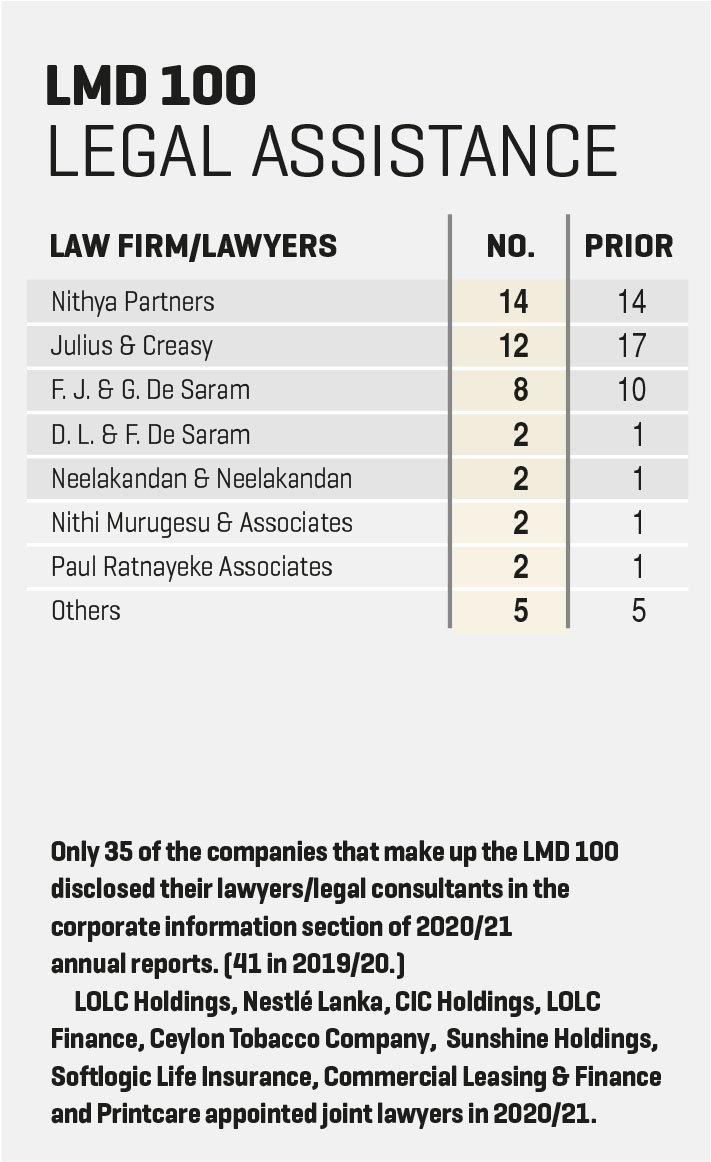 As far as legal eagles and the LMD 100 go, Nithya Partners moves up one notch to top the 2020/21 edition of the lawyers league by virtue of representing 14 leading listed companies (as it did in the previous financial year) while Julius & Creasy occupies second place with a tally of 12 (down from 17 in the prior year).
In third place is F. J. & G. De Saram, which provided legal counsel to eight companies in this year’s LMD 100 (in financial year 2019/20, this count stood at 10).
D. L. & F. De Saram, Nithi Murugesu & Associates, Neelakandan & Neelakandan and Paul Ratnayeke Associates also make their presence felt in the 2020/21 edition of Sri Lanka’s leading listed companies by servicing two LMD 100 clients each.
More than half (65) of the LMD 100 companies didn’t disclose their lawyers or legal consultants in financial year 2020/21, which is broadly in line with the status quo in the previous term.
As far as other facts and numbers go, nine LMD 100 entities – viz. LOLC Holdings, Nestlé Lanka, CIC Holdings, LOLC Finance, Ceylon Tobacco Company, Sunshine Holdings, Softlogic Life Insurance, Commercial Leasing & Finance and Printcare – appointed joint lawyers in financial year 2020/21.
In the preceding year, eight of Sri Lanka’s leading listed companies (LOLC Holdings, LOLC Finance, Nestlé Lanka, Ceylon Tobacco Company, CIC Holdings, Sunshine Holdings, Softlogic Life Insurance and Commercial Leasing & Finance) were serviced by two or more law firms. For the 13th consecutive year, Emagewise is the most sought after creative firm vis-à-vis designing annual reports for LMD 100 corporations. In the period under review, it served as design partner to as many as 46 of Sri Lanka’s leading listed companies – this number is slightly lower than its portfolio in the prior financial year when Emagewise collaborated with 49 LMD 100 clients.
Smart Media and Optima Designs are the first runners-up in the creative stakes, having designed 12 annual reports apiece for LMD 100 entities. For the former, this marks a decline from 13 in financial year 2019/20 while the latter served four more leading listed corporates than in the prior year to tie for second place.
RedWorks follows with nine LMD 100 scalps to its credit in this special edition compared to three in the previous year.
Cumulatively, these four design firms account for more than three-quarters (79 annual reports, to be exact) of the entities that are featured in the latest edition of the LMD 100 – deemed to be Sri Lanka’s version of the Fortune 500 and launched as The LMD 50 back in 1994.
The remaining LMD 100 annual reports were designed by creative agencies such as Copyline and Mediawize – they lay claim to tallies of five and two leading listed clients respectively.
On the trivia front, it is worth noting that similar to the preceding year’s listing, only 94 of the LMD 100 companies disclosed who designed their annual reports in financial year 2020/21. LMD’s longstanding print partner Softwave Printing & Packaging and Gunaratne Offset take the number one spot in the LMD 100 printers league with each having been picked to print the annual reports of 13 of Sri Lanka’s leading quoted companies during the period under review.
This marks the seventh straight time that Softwave has accomplished this feat while Gunaratne Offset added four more corporate clients from the previous year to increase its tally in the 2020/21 edition of the printers’ rankings of the LMD 100.
Meanwhile, Printage falls to the second runner-up’s place in the LMD 100 printers league with five clients in the bag – down from 13 in the preceding financial year.
It is trailed closely by Aitken Spence Printing & Packaging and Printel, which registered a score of four LMD 100 annual reports each in financial year 2020/21 – the former increased its count by one while the latter’s fell by one compared to 2019/20.
Other noteworthy contenders in the printers’ stakes include Optima Designs and Nethu Print Solutions, with their respective tallies being three and two. In the meantime, Ceylon Printers and Karunaratne & Sons have one LMD 100 client each to their credit during financial year 2020/21.
And finally, as many as 54 LMD 100 entities haven’t disclosed their print partners in financial year 2019/20, which is an increase from the 45 that didn’t do so in the previous 12 month period.

BANKERS LEAGUE
HNB CONTINUES TO BE AT THE FOREFRONT Hatton National Bank (HNB) exerts its dominance in the context of banking partners to Sri Lanka’s leading listed companies in financial year 2020/21. Having serviced 75 clients in this edition of the LMD 100 (versus 72 in 2019/20), HNB pipped Commercial Bank of Ceylon (ComBank) to the post by four client accounts – the latter serviced 72 LMD 100 clients in the previous financial year to share the top spot.
State owned Bank of Ceylon (BOC) and private sector financial services provider Sampath Bank are placed third and fourth in the bankers league, with tallies of 64 and 60 clients respectively in 2020/21 – in the prior financial year, BOC and Sampath Bank bagged 62 and 61 LMD 100 clients respectively.
National Development Bank (NDB), People’s Bank and Nations Trust Bank and DFCC Bank served over half of the LMD 100 corporates in the period under review, whereas Seylan Bank isn’t far behind with 49 scalps.
Of the remaining 11 banks, eight registered client lists run into double digits – viz. Standard Chartered Bank (42), HSBC (29), Deutsche Bank (26), Pan Asia Banking Corporation (26), Citibank (21), Union Bank (22), Cargills Bank (23) and Muslim Commercial Bank (14).
A trio of state banks – viz. BOC, People’s Bank and National Savings Bank (NSB) – serviced 125 LMD 100 clients in 2020/21, which corresponds to a marginal increase from 122 in the preceding financial year.
Only 86 (versus 85 in 2019/20) companies ranked in the LMD 100 disclosed their bankers in the corporate information section of their 2020/21 annual reports.
Only 86 of the companies that make up the LMD 100 disclosed their bankers in the
corporate information section in the 2020/21 annual reports. (85 in 2019/20.)