Capital markets were under intense pressure in the second quarter (Q2) of 2022 as foreign institutional investors indulged in heavy selloffs due to increased interest rates by the US Federal Reserve to curtail inflation and cool down the economy. Against this backdrop, the aggregate market value of the top 50 Asia-Pacific (APAC) companies declined by 6% quarter-on-quarter (QoQ) in Q2 2022, finds GlobalData, a leading data and analytics company.

GlobalData’s Company Reports Database reveals that the top 50 list continues to be dominated by China with 29 companies, followed by Japan (seven), India (six), Australia (three), South Korea and Hong Kong (two each), and Taiwan (one).

Out of the top 50, 31 companies reported a QoQ decline in their market value with the most notable being Keyence, BHP, and Infosys, which lost 25% or more. 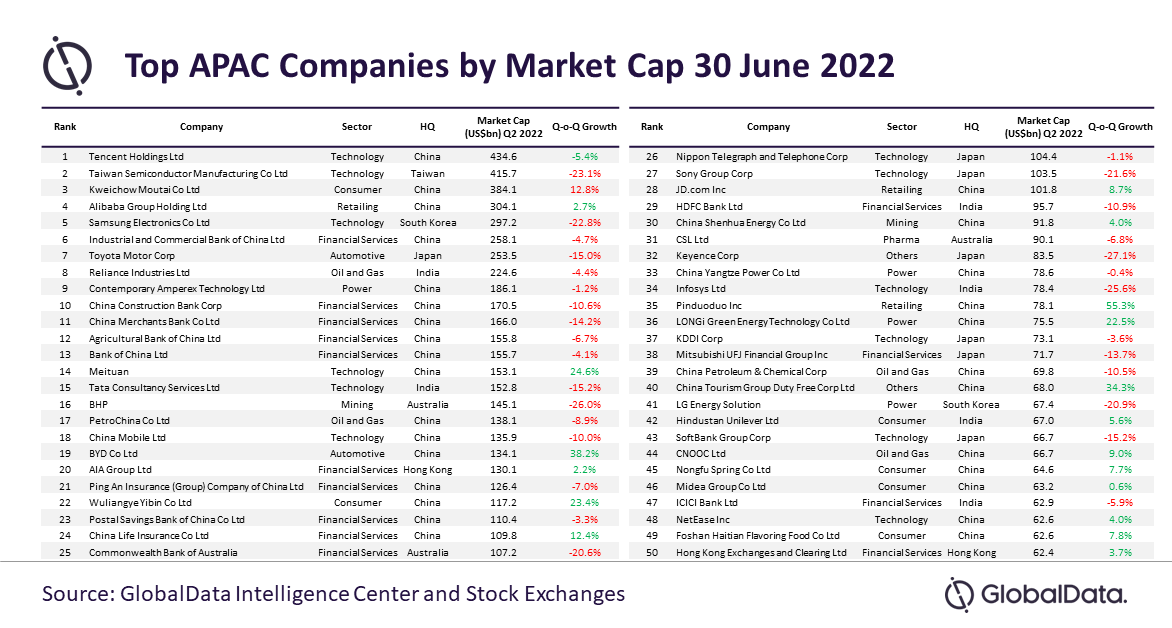 Murthy Grandhi, Company Profiles Analyst at GlobalData, comments: “BHP’s share price has been plummeting due to the declining iron ore prices on account of weak demand in China, coupled with concerns of a global recession, impacting the commodity prices.”

Indian IT major Infosys reported a 25.6% drop in its market cap over the previous quarter on the back of an anticipated decline in margins due to elevated attrition rates, which resulted in increasing manpower expenses. The decline was also due to the tightening monetary policy in the US, which has been creating pressure on technology stocks such as Infosys as it generates 62% of revenue from North America region.

Though Keyence reported a 40% and 54% rise in top-and bottom-line performance for FY2022, respectively, it lost 27.1% in its market cap compared to the previous quarter owing to a rise in a short interest of shares.

Some of the better performers were Pinduoduo and BYD, which saw their market value soar by around 35% or more over the previous quarter.

Grandhi comments: “China’s largest agriculture marketplace Pinduoduo, saw its market cap grow by over 50% owing to a 7% rise in revenue for the first quarter ended 31 March 2022 (Q1 2022) and a rise in average monthly users and active buyers.”

Warren Buffett-backed EV maker BYD’s market value rose by 38% on account of the government's consumption incentives and production resilience coupled with a 63% year-on-year rise in Q1 2022 revenue, driven by the rapid growth in the new energy vehicles.

Grandhi concludes: “With more Chinese companies dominating the top 50 table, regulations such as an anti-monopoly law can mount pressure on Chinese technology companies, which will have a negative impact on their market value. Shallow economic recovery of the domestic demand and slower-than-expected easing of COVID-19 restrictions in China can create headwinds in Q3 2022.”