Gatwick has become the UK’s first airport to confirm it will use facial-recognition cameras on a permanent basis for ID checks before passengers board planes.

It follows a self-boarding trial carried out in partnership with EasyJet last year.

The London airport said the technology should reduce queuing times but travellers would still need to carry passports.

On Tuesday, a spokeswoman for Gatwick told BBC News it had taken the decision, first reported by the Telegraph newspaper, after reviewing feedback from passengers in the earlier test.

“More than 90% of those interviewed said they found the technology extremely easy to use and the trial demonstrated faster boarding of the aircraft for the airline and a significant reduction in queue time for passengers,” she said.

“Gatwick [is now planning] a second trial in the next six months and then rolling out auto-boarding technology on eight departure gates in the North Terminal when it opens a new extension to its Pier 6 departure facility in 2022.”

She added passengers would still need to pass through the bag-check security zone, at which point they would need to present a boarding pass. 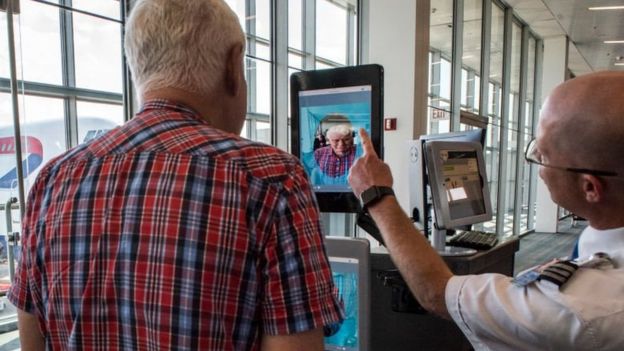 In addition, they would need to scan their passport at the departure gate for the system to be able to match the photo inside to their actual face.

The process is similar to that already used at the ePassport arrival gates at some UK airports. But it differs from Gatwick’s original test, where travellers scanned their faces at the luggage drop-off zone.

That decision will limit Gatwick’s ability to use facial recognition for other services.

China’s Chengdu Shuangliu airport, for example, recently installed a system that automatically presents travellers with up-to-date information about their flights when they walk up to a screen. This is made possible because visitors have to present their passports at an earlier stage.

Wow! China Airport face recognition systems to help you check your flight status and find the way to your gate. Note I did not input anything, it accurately identified my full flight information from my face! pic.twitter.com/5ASdrwA7wj

Even so, one civil liberties group is worried travellers might not realise they can opt out.

“Our main concern… would be the issue of proper consent,” said Ioannis Kouvakas, from Privacy International.

“Placing general or vague signs that merely let individuals know that this technology is being deployed, once individuals are already inside the check-in area, is inadequate, in our view, to satisfy the strict transparency and consent requirements imposed by data-protection laws.

“If this would apply to child travellers… it raises even more concerns, considering the special protection afforded to children’s privacy and the risks associated with having their biometrics taken by the airport private entities.”

A spokeswoman for Gatwick said it had designed its use of the technology to be “compliant with all data protection law” and passengers would be able to choose to have their passports checked by human staff.

“Our next passenger trial will take place in the next six months and no data will be stored – instead it will be held momentarily while the identity check takes place, only a matter of seconds,” she said.

Children under a certain age would need parental or guardian consent, she added, although Gatwick had still to determine what the cut-off point would be.