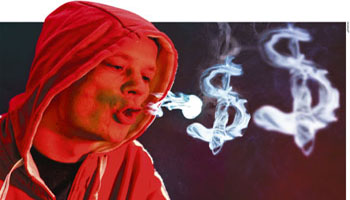 Few would contest that the United States enjoys a privileged status in international trade. Yet, most of this privilege isn’t derived from unfettered markets, or due to the American economy being better-managed or more productive than most. Rather, this has come about as a result of the history and political economy of the US Dollar.

Decisions on how currencies are used in global trade have favoured American interests since WWII, undeservedly granting the US more political and financial clout than any other nation on Earth. But there have been regional and international efforts to curtail the hegemony of the greenback.

While none has gained significant traction thus far, dollar hegemony must be reduced for the health and stability of global markets.

US OVERSPENDING When Word War II ended, the international community agreed on a system of exchange rates between currencies upon which to rebuild the global economy. Known as the Bretton Woods system, it established the US Dollar as the global reserve currency because it was backed by gold and the other major economies were struggling with wartime debt at the time.

This meant that every country had to hold a quantity of US Dollars as a reserve – and this still holds true today even though Bretton Woods has been terminated. Moreover, when two countries transact business, they usually pay in dollars.

America purchases imports with dollars that it prints. And since those dollars are held by other countries out of necessity, the system constitutes an ‘exorbitant privilege.’ Effectively, a massive interest-free loan is offered to the United States by the rest of the world every year – and the McKinsey Global Institute estimates that this provides a net annual financial benefit amounting to between 40 billion and 70 billion US Dollars.

This privilege causes global instability. For one thing, if and when the American economy slows down or the dollar experiences a crisis, catastrophic global implications follow.

ASIAN MONETARY FUND In 1997, the Thai Baht’s value crashed, resulting in a crisis that wreaked havoc on most Southeast Asian economies and provoked fears of global contagion. So Japan proposed the creation of an Asian Monetary Fund (AMF), which is a regional version of the International Monetary Fund (IMF) albeit an entirely separate entity.

The reason behind the proposal was largely political.

Beyond this reasoning, Japan was lending and investing heavily in Thailand, and a devalued baht made it more difficult to export to that country. The creation of AMF would have increased the influence of all member states and substantially reduced European and American hegemony in the region. But amid lobbying from the US, China abstained from voting for the creation of the AMF and effectively killed the proposal.

IMF GLOBAL RESERVE The IMF operates a virtual asset known as Special Drawing Rights (SDR) that acts like a currency between nations. In the IMF’s own words, they were created because “the international supply of two key reserve assets – gold and the US Dollar – proved inadequate for supporting the expansion of world trade and financial flows that were taking place.”

According to a subsequent IMF publication, the SDR was supposed to become the “principal reserve asset in the international monetary system,” thereby replacing the greenback. This seemed likely when the dollar experienced instability in the 1970s. Yet, when the US Federal Reserve cranked up interest rates to stem inflation, countries willingly chose to place their American Dollars as a reserve currency rather than SDR.

This was because the US interest rates shot up and storing wealth in dollars became much more profitable than holding SDR. While the latter continues to exist and would provide significantly greater global stability if countries used it (rather than the US Dollar), the financial incentives are not sufficiently powerful to sideline the dollar.

SWEET ALTERNATIVE In 2010, a virtual currency was created by ALBA, which is a trade coalition of Latin American nations. In practice, its currency (known as SUCRE) could behave like a regional version of the SDR, and provide stability and low-interest lending between Latin American countries.

In fact, the SUCRE was conceived by former Venezuelan president Hugo Chávez for the explicit purpose of reducing US influence in the region. And it has the potential to do exactly this in addition to increasing regional resilience by providing a unit of account and regional liquidity in the event of a global financial crisis. But it hasn’t caught on and is hardly used by member states.

Unfortunately, the reason for this could be the same as why the SDR has not caught on – the US Dollar may be a flawed master of global trade but it is still the master and a profitable one to serve.

In spite of repeated recessions, nations are slow to learn. But eventually out of sheer necessity, they will learn to reduce their faith in the dollar and switch to a different global reserve currency.