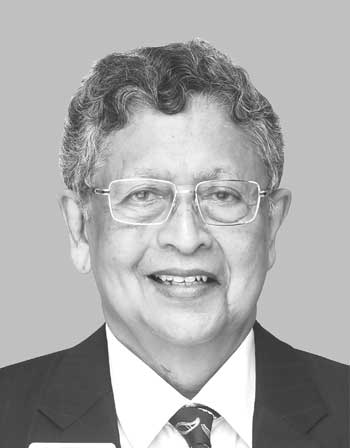 There is no doubt that there have been many defining moments in the life and times of Mahendra Amarasuriya. Any man or woman with such a long and distinguished career would confidently list several.

But there’s one event that clearly commends itself to many as a lesson for the ages: his resignation from the Commercial Bank of Ceylon as its chairman on 30 December 2011.

Amarasuriya resigned from office because he believed it was the right thing to do – in the best interests of the bank he had so faithfully served – at the time. He didn’t have to and wasn’t asked to; he resigned because by doing so, he’d ensure that the bank would maintain its good relations with the Central Bank of Sri Lanka.

The backdrop to this event is somewhat convoluted but suffice it to say that it centred around what was considered to be a rather controversial directive of the Monetary Board of the Central Bank, which capped the age of a director on the board of a commercial bank at 70 and the tenure of a director to a maximum of nine years. He had celebrated his 70th birthday in December 2010.

Matters pertaining to the directive were being disputed in the courts and when a stay order had been obtained, Amarasuriya said: “I decided to stay on until I heard that the Central Bank had indicated that anyone who stays beyond 31 December 2011 will be in contempt of court… The bank’s legal advisors and other legal authorities confirmed that there was no contempt of Supreme Court. I could have continued.”

For 16 years as its chairman, he transformed the Commercial Bank from a Colombo-centric corporate banking entity into one of the nation’s leading private sector banks.

Global Finance magazine had ranked it the number one bank in Sri Lanka for 13 consecutive years in the 16 years of his tenure. The bank was also rated among the best 1,000 banks globally on two occasions.

“I gave considerable thought and decided that if I did not resign, it would affect the relationship between the Commercial Bank and the Central Bank. The Central Bank is in charge of all the banks in Sri Lanka, so considering all implications, I resigned with effect from December 30,” he said, never mentioning the heavy heart with which he did so.

Mahendra Amarasuriya: the eminence of his altruism.