The Commercial Bank of Ceylon has been ranked the Most Respected Bank in Sri Lanka for the 15th consecutive year and as the fourth Most Respected corporate entity in the country overall, in the 2019 ‘Most Respected Entities in Sri Lanka’ rankings compiled by LMD magazine following a survey by Nielsen. 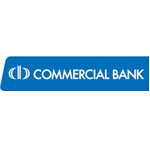 The Bank was also ranked second overall for Honesty and Financial Performance and among the Top five corporate entities in Sri Lanka for Management Profile, Corporate Culture, Quality Consciousness and Vision.

Commercial Bank continued to be the only bank among the top five Most Respected entities in Sri Lanka in this latest list published by LMD. The Bank has been the Most Respected Bank in LMD’s annual ranking since the publication launched the ranking in 2005. The list of Sri Lanka’s most respected companies includes the largest and most diversified conglomerates in the country and some of the world’s best-known multi-national companies (MNCs).

“We believe that our consistency in being steadfast on core values and best practices even in times of a challenging external environment is a key to retaining the respect of our customers and our peers,” Commercial Bank Managing Director Mr S. Renganathan said. “Maintaining our position as the most respected bank in Sri Lanka for 15 years straight is a noteworthy achievement indeed, and one which I dedicate to the entire Commercial Bank team for its unwavering dedication and passion.”

In its announcement of the 2019 rankings, LMD magazine said: “Commercial Bank retains fourth place among the nation’s Most Respected entities. The Bank also gains the honour of being perceived by its peers as a benchmark for financial performance, quality consciousness, management profile, honesty, corporate culture and vision.”

Replacing the Olympic Ranking System it adopted in 2015 to record peer perceptions of corporate admiration, LMD used a weighted ranking system this year where the first mention of a corporate entity in each of the 10 areas of assessment was assigned a weight of five, the second a weight of three and the third a weight of one. The final rankings were based on the sum of weighted scores of the entities.