(CNN) – Ethiopian Prime Minister Abiy Ahmed called for peace in the Horn of Africa as he received his Nobel Peace Prize medal in a ceremony on Tuesday.

Abiy said it’s important that the region does not become a “battleground” as more Western powers expand their military operations and terrorist groups seek to establish their foothold in the region.

“We do not want the Horn to be a battleground for superpowers nor a hideout for the merchants of terror and brokers of despair and misery,” Abiy said in his Nobel lecture in the Norwegian capital on Tuesday.

Abiy was awarded the 2019 Nobel Peace Prize in October for his role in ending the 20-year war between Ethiopia and Eritrea. 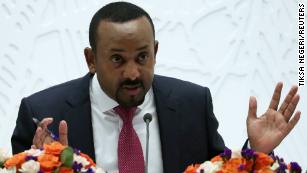 He is also being recognized for brokering peace in ongoing disputes in some other East African countries, Berit Reiss-Andersen, chair of the Norwegian Nobel Committee, said in her speech before presenting Abiy with the medal on Tuesday.

“You have demonstrated an understanding that peace among neighbors is essential in a troubled region. You have made common cause with all the stakeholders from Eritrea, Djibouti, Sudan, South Sudan, and Kenya who have participated in promoting mediation and peaceful resolution,” she said.

Abiy has garnered praise for implementing radical political reforms since he took office last year, including freeing thousands of political prisoners and appointing women to almost half of the top posts in his cabinet.

However, not everyone is happy about his role in ending the two-decade dispute with Eritrea. His critics say the deal has not translated to peace for Eritreans and that Abiy’s support of Eritrean President Isaias Afwerki effectively legitimized his hold over the country.

On Monday, dozens of demonstrators believed to be Eritreans marched to the Norwegian Parliament building in Oslo ahead of Abiy’s lecture to protest the Nobel Committee’s decision to award him the prize. 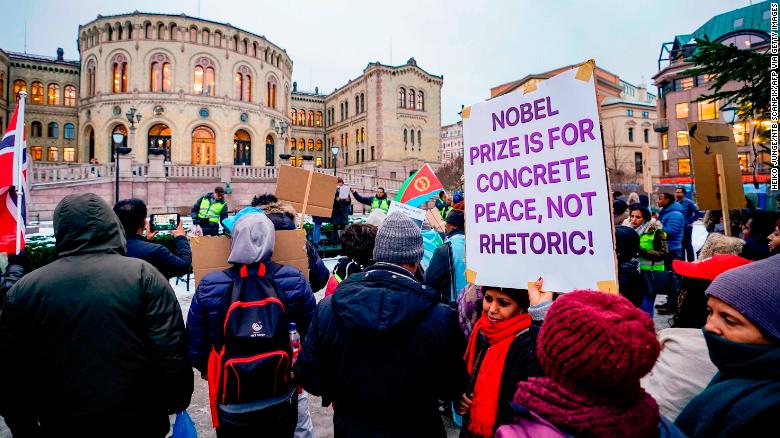 The Ethiopian leader has been criticized for declining press interviews during his visit to Oslo this week, citing the need to return Ethiopia to attend to domestic issues quickly, according to media reports.

But in his Nobel lecture, Abiy said Ethiopia is highly regarded for the freedom of its press, and his government was working to create a country that is “second to none in its guarantee of freedom of expression.”